In late 2011/early 2012, we recorded demo versions of several songs we were considering for the Devil’s Rope album at Dave Dewitt’s Shed 55 Studio here in Knoxville. This was during the brief time that Bill Van Vleet was filling in on drums before Chris Bratta came on board (where he’s been for nearly three years now).

We recorded versions of “Weird Weather,” “Devil’s Rope,” “Monkey Dance,” and “Halo Days,” all of which we eventually re-recorded with Chris on drums for the album. While we were there, we also tracked this song, “Looking for Distraction,” that we never got around to recording again. That happens sometimes. For instance, we had two or three more songs that we were gonna record for consideration for 33.1/3, but we decided we had a complete album before we got around to them.

Some of these lost songs come back around later, but mostly they get left behind in the frenzy to write and record new material.

Although “Looking…” never got another studio recording, it did show up on the limited-edition Live from the Pilot Light CD that we made available as a premium for Devil’s Rope pre-orders.

In the summer of 2013, Knoxville filmmaker Douglas Stuart McDaniel asked the TL3 to make some music for the short film that he and his team, Scuffletown Monkeys, were going to produce for competition in the Knoxville Film Festival Seven-Day Shootout. It sounded like fun, so we agreed.

There wasn’t a lot of preparation to be done since the ’Monkeys wouldn’t even be assigned a genre until the beginning of the competition, whereupon they had seven days to write, film, and edit their submission for the contest. So we decided to join in on the spirit of the thing and waited until they gave us some insight into their plan before proceeding on our end.

If I remember correctly, we found out on a Wednesday that their plan was to make their film about a family of assassins. Susan had been playing around with a song she was writing called “Bang, Bang” so she and I finished it that night. The following day, we worked it up with Chris at rehearsal, and then on Saturday morning we went to John Baker’s studio (Baker Acres) and recorded the track.

In the meantime, Doug and his ‘Monkeys had altered their plot idea somewhat. The song was already finished and they still wanted to use it, so we sent it their way that afternoon, along with an instrumental mix so they’d have that to work with as well.

During the remainder of their production week, they sent occasional cuts of the film for us to see, and when the competition took place, Susan and I attended the showing. Unfortunately, “The Agenda” didn’t win, but it looked great on the big screen. And it was fun to hear the song blasting through the big-ass theater speakers.

It was a new experience for us and we most definitely had a blast being involved with such a creative bunch of people.

So, for today’s Friday Freeload, we present “Bang, Bang” in its full original form.

And I still think “The Agenda” should have won. Go watch the original film here.

How about a 3-D Record Release Party… 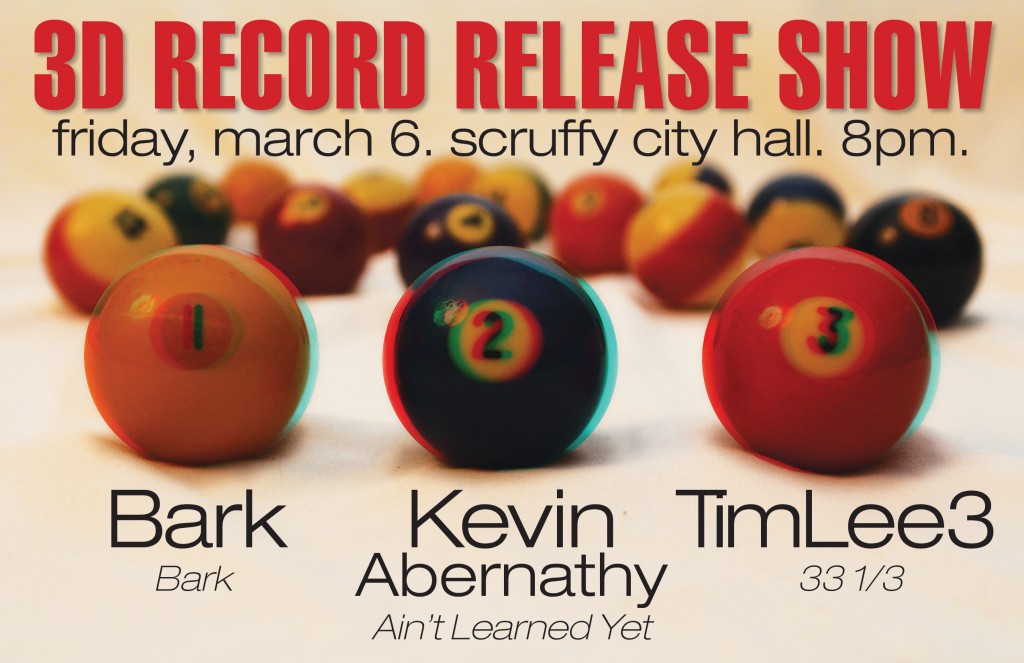 This week’s Friday Freeload song is a previously unreleased outtake from the No Discretion album that came out in 2004.

During the recording, which I started in 2002, shortly after the release of Under the House, my first solo record in years, I made a trip from my current home in Knoxville back to my hometown of Jackson, Miss. While there, I spent an afternoon with my old pal Neilson Hubbard in the guest room of his apartment, dubbed Mr. Lemons Studio in honor of Neilson’s late cat.

I’d met Neilson several years earlier when we were both living in Oxford, Miss. He was in school there and I was hiding from the music business. He also had a cool band called Spoon (who eventually changed their name to This Living Hand in deference to the Texas Spoon) with his high school buddy Clay Jones and violinist Helena Lamb. Neilson and I became good friends, going bowling at University Lanes and playing together (I recall a coupla later TLH gigs on which I played bass and Garrison Starr played drums).

So I jumped at the opportunity to work with Neilson when the occasion presented itself. Also on hand for the session was one of my oldest and dearest friends, Bruce Golden, who programmed some rhythm tracks to work from. We recorded two songs: “The End of Time”, which made it on the record and this one, that didn’t (we recorded something like 18 songs for that disc). For “What’s This,” I played two tracks of acoustic guitar, sang the vocal and left it up to Neilson to finish it up. On a subsequent trip, I added the seasick-sounding guitar “solo,” but Neilson played everything else. He’s a talented guy.

I only have a vague memory of writing the song, but I was in the middle of a writing binge so they were coming quickly. I did have a friend of mine in mind when writing this, but there’s nothing literal to it at all. It was just a scenario I dreamt up.

We made a lyric video…