“Guetts wants to know if they can borrow our bass amp.”

Susan posed that question in the middle of a crowded Pilot Light in Knoxville’s Old City. It was barely five in the afternoon, and a lot of folks were already filling the joint, nodding their heads up and down in front of the stage, standing in the back to get a more full view, leaning on the bar, or coming and going through the front door to smoke.

It was the third annual Big Asses Fest, and by that time several acts had already played. Bark was still three bands away, but things were on schedule, everybody was having a good time, and the vibe was great. Last-minute negotiations ensued between bands to share gear and make the changeovers simpler. Zach from the Sweet Years was letting Susan use his drum kit, and Niles from the Crumbsnatchers was going to use one of our amps, thanks to Guettts’ request.

As Mare Vita was doing their thing, i took it all in. This was my world. A bunch of cool bands working together to make it all happen. No goals other than to get on the stage and do it up.

END_OF_DOCUMENT_TOKEN_TO_BE_REPLACED 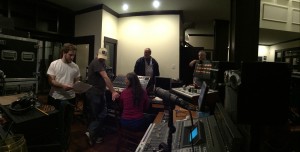 END_OF_DOCUMENT_TOKEN_TO_BE_REPLACED

Where Does the Time Go?

Editor’s note: Tim wrote this “Diary of a Never Was” installment back in November, but it fell between the cracks during winter hibernation. Now maybe that lazy bastard will get back in the groove sometime and start writing these blog entries on a regular basis. Who knows?

I figure since it’s been about exactly three months since I scribbled for you, that maybe it’s time to do it again. To be honest, my brain has been a bit scrambled here lately dealing with the new world order at Casa del Lee. We’ve been plenty busy (and then some), doing the things that pay the bills as well as those that feed the soul. All that added up leaves little time for pecking on the keyboard.

Last night, I was at an art fair at Ironwood Studios, a cool local metal and woodworking shop. Lots of local artisans were on hand, displaying their wares. Susan shared a table with our friend Billie Sue Owens. Susan had her Wrist Rock-Its out for perusal alongside Billie Sue’s handmade jewelry. The whole deal was a good time with several good friends, barbecue courtesy of Sweet P’s, and cool art.

I was talking to one of the artists, a guy I’d met at Music Room Guitars, the shop owned by our guitar pusher Brad Gibson. He mentioned that he’d enjoyed my blogs on here, which reminded me how long it’s been since I’ve done one.

So, here I am again. I’ll try to play some catch-up and not get too bogged down in the details. I wouldn’t want to be boring or anything.

END_OF_DOCUMENT_TOKEN_TO_BE_REPLACED

We got y’all a present…

We recorded this track for a film project that was put on the back burner for the time being. We dig it so much that we thought we’d just throw it out there for y’all.

Recorded at John Baker’s studio, The Arbor, with John Baker and Gray Comer at the board, “Take Me Back to Happy Valley” is a traditional bluegrass tune, and original recordings of the song fall squarely within that genre with banjo, mandolin, and quick tempo. For comparison, The Bailey Brothers/Happy Valley Boys recorded a version (https://www.youtube.com/watch?v=Kdvp_CqMV8k).

We decided to turn the song on it’s head a bit. We slowed it down significantly, put it in a minor key, and used mostly low-end instrumentation. Susan played Bass (and sang), Tim played Bass VI, Chris played percussion, and we brought in guests: Daniel Kimbro played bowed upright Bass, and Greg Horne played a long-scale Banjo borrowed from John Harvey and Mary Podio at Top Hat Studio.

What we came up with sounds more like a murder ballad.

So, listen, download, and enjoy our year’s end gift for you.

Miss me, dear readers? (Kinda presumptive, I guess, to assume anyone is reading this, but a fellow’s gotta dream.) I’ve been remiss in my scribbling duties, and I apologize for that.

Let’s see, what’s been going on around here? After an actual slow week, musically, for me (not for Susan, bless her heart, who spent a whole five days, nine hours a day, working with kids at the Knoxville Girls Rock Camp … it was hard, but she said it was rewarding), last week got back to some sort of normal busy-ness.

On Tuesday, I rehearsed with the Barstool Romeos, the rockin’ honky-tonkers I play with from time to time. The band is fronted Mike McGill (who I’ve mentioned before) and Andy Pirkle, and features Josh Sidman on bass and Mark Dunn (who I played with on a McGill and the Refills gig a couple blogs ago) on drums.

I’ve known Mike and Andy since the Corner Lounge days. Back then, Mike was a clean-cut bluegrass picker and singer and Andy was the leader of a great punk rock band called Speed Shifter. Since that time, Mike’s hair has grown out and he’s delved deeper into his hard country and southern rock roots, while Andy has moved more in that same direction. Once the long-time friends figured out they could write songs and sing together well, sparks started to fly.

And they both have excellent beards.