reproduced from the original web site link that apparently no longer exists.

Tim Lee 3 give the ‘Devil’ his due 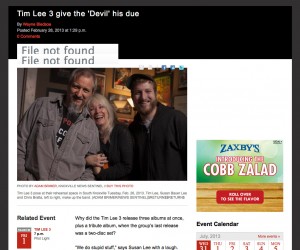 Why did the Tim Lee 3 release three albums at once, plus a tribute album, when the group’s last release was a two-disc set?

“We do stupid stuff,” says Susan Lee with a laugh.

“I like to think of it as just doing the thing that other people don’t do,” says Tim Lee. “It’s easy to fall into the trap of, ‘Everybody does certain things this way because they work.’ Maybe they do, but it’s more fun to see what else works. … Plus, maybe it’s just we’re contrarians.”

Doubtless, Tim’s conclusions are both true.

Over dinner at Senor Taco, the trio, long-married couple Tim and Susan plus drummer Chris Bratta, laugh a lot. They’ve only been back from a run to the Lees’ Mississippi home-turf for a couple of hours, but there’s no hint of tension. Tim, who normally relishes spirited debate over music, has vowed to not argue “because people expect it!” When goaded, he clams up.

The band has plenty to say with its new music. The new studio album,“Devil’s Rope,” is the sort of high-energy, unvarnished rock ’n’ roll that fans expect. Of course, when the group ventured into a fan-funding effort by way of Indiegogo, it could only be expected that the band would do something different.

“We used it as more of a pre-sale,” says Susan. “We’ve already made the recordings happen whether you give us money or not — that’s our skin in the game. But if you go ahead and order it in advance you get it first and you get these extra things.”

The pre-sale packages were as low as a digital download of “Devil’s Rope” to packages that included the live recording “Live From the Pilot Light,” an album by Tim and Susan’s side project The Quake Orphans (and the option of a vinyl copy of “Devil’s Rope”) to the band coming to your home to perform a concert and preparing a barbecue feast.

No one has sprung for the concert and barbecue yet (there’s still time), but the three-disc packages sold out quickly and covered the costs of producing all of the discs.

Tim and Susan Lee have been part of Knoxville’s musical fabric for the past 13 years. Mississippi natives, the couple came to Knoxville for their day jobs editing and laying out specialty magazines. Tim was a rock veteran who had found a small national following in the group The Windbreakers (Rolling Stone cited the group as a Best Unsigned Band) and he worked as a gunslinger for hire during the group’s hiatuses and after the act disbanded. In Knoxville, he began contributing guitar to local CDs and establishing a following in the area. It wasn’t until Susan came on board as bassist and co-lead singer-songwriter with the 2008 album “Good2B3,” though, that the group became The Tim Lee 3. The group has gone through a series of drummers. Local music veteran Bratta (who still performs with the Knox County Jug Stompers and, sometimes, Dixieghost) joined in the spring of 2012, just as the group was starting to record what would become “Devil’s Rope.”

“Chris had been playing with us maybe a month,” says Tim.

Tim and Susan, though, still had some songs to write.

“We did do a ‘songwriting date night’ when we felt like we didn’t have enough songs,’” says Susan with a smile. “We planned dinner on the deck and we brought our notebooks out. I opened mine and the papers went flying and I just said ‘Word salad!’”

The song “Signals,” now a concert favorite, came from that night.

The songs on “Devil’s Rope” (many of which are repeated on different forms on the other releases) vary in theme.

“The songs are different, but the fundamental rock ’n’ trio is always there,” says Bratta.

Tim says the group has finally settled into its groove in the local scene:

“We get asked to do things we wouldn’t have before. And we always say ‘yes’ — unless it sounds like it’s not going to be fun.”