reproduced from the original web site link that apparently no longer exists. 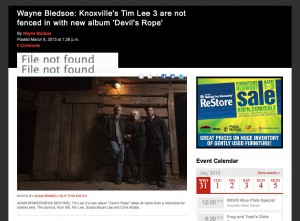 There’s something to be said for artists who arrive in a burst of brilliance — musicians who create their best work in their 20s and make you feel the passion and fire of youth. But there’s maybe something just as good or even better about the artists who simply keep getting better as they get older.

Count Tim Lee in the latter category. For the past decade the native Mississippian, current Knoxvillian and former co-lead singer-songwriter with the nearly-were-, should-have-been-famous Windbreakers has been creating music that gets richer and stronger with every release.

Since 2004, Lee’s music has been part of a family affair. Lee’s longtime spouse, Susan Bauer Lee, joined as co-songwriter/co-lead vocalist and bassist, but it wasn’t until 2008’s “Good2b3,” the first album credited to the Tim Lee 3, that she sounded like an equal member of the group.

Susan may have been a novice bassist and performer, but she infused new energy and enthusiasm into the act. Not only that, she freed Tim up to concentrate on his guitar-work, making it seem like the act gained two welcome new voices.

On “Raucous Americanus,” the trio (then with drummer Bill Van Vleet) came into its own with a playful double album filled with rock solid rock ‘n’ roll and songs.

However, the new “Devil’s Rope” is even better. The songs are tight, smart and heavy on hooks. The disc’s opener, “Signal,” and the title track follow-up are like a one-two punch. “Signal” is beguilingly sweet-sounding and catchy and “Devil’s Rope” is a dark rocker bathed in gritty echo. The latter’s heavy bass riff , punctuating guitar chords and on-the-money drumbeats (courtesy of drummer Chris Bratta) stay with you long after the song is over.

Those tracks and what follow make up the best collection the act has yet released. Nearly every one of the 13 tracks gets better with repeated listens.

In the past, the best numbers have always been the full-out rockers. Yet the song “Alibi,” possibly the quietest the band has yet recorded, is a stand-out and is no less dark than the band’s harder songs:

Add to that, “Devil’s Rope” sounds great —from the sweet jangly electric 12-string guitar on “Halo Days” to the wonderfully nasty sustain on “Cut-Rate Divorce,” the disc sounds fresh and vital.

It’s a shame that “Quake Orphans” and “Live From the Pilot Light” (released only as bonuses in the band’s pre-order package) are not widely available, too.

“Pilot Light” catches them at their rawest with plenty of sparkling moments and a few warts, but it’s the “Quake Orphans,” featuring all-acoustic renditions of TL3 songs (with cellist Cecilia Miller and multi-instrumentalist Greg Horne) that provide the most contrast.

The Lees’ voices have always been limited instruments that are sometimes overpowered in a rock context, but in this quiet environment, they shine. And Horne’s mandolin and Miller’s cello let you appreciate the tunes a totally different way.

With luck, the group will give audiences a chance to hear this configuration as well.

But, regardless, let “Devil’s Rope” be the lasso that draws you to a band you need to hear.