Thoughts on flying under the radar …

Ah, the day of rest at the end of another one of our “slow” weeks this summer. The last six days have been pretty easy-going, you know, just two rehearsals, a recording session, and three gigs that culminated in last night’s Neil Young tribute featuring a baker’s dozen players and a megaton of fun.

So much for my notion that July would be not so busy.

On Monday, I got home in time for a low-key rehearsal for the Neil Young deal. The core band consisted of the TL3 along with our long-time cohort Greg Horne. Adam and Serrenna McNulty from Guy Marshall were a big part of the first of two sets, while GM guitarist Eric Griffin joined in on several tunes as well. The perpetually cheerful Chris Durman (aka “Smiley”) played acoustic guitar and harmonica too.

We’ve just recently gotten to know the McNulties and Eric, and it has been a treat. I’ve pointed out before that I’m a big fan of their band (go check out their debut full-length Depression Blues), and is often the case the folks are as cool as their music.

It was a good run-through of the songs and an excellent hang.

END_OF_DOCUMENT_TOKEN_TO_BE_REPLACED

(July 13, 2015)   After a couple weeks, I’m back. Following last month’s whirlwind of gig activity, July is much slower, just a couple local shows.

Well, that and the recording of some new TL3 songs and the organization of a Neil Young Tribute Show that only involves some 14 people and nearly 20 songs.

For the past five Januaries, Susan and I have been involved in an annual benefit called Waynestock, a multi-day show featuring a wide variety of area bands and artists. The first one was thrown together quickly to raise funds for the family of our friend, Knoxville music writer Wayne Bledsoe after his 23-year-old son Andrew died from a suspected heart defect.

It took legs pretty quickly, and every year Waynestock benefits a different deserving family or organization.

During the last three, our band has hosted the finale set involving several artists from around town. This past January’s was a Young tribute, which went over well, so our friends out at the Shed in Maryville asked us to reprise it on their stage on July 25. Some of the folks who took part in the first one are not available this time around, and some who weren’t able to participate back in January are free this time. So there’s plenty to work on, personnel-wise, plus we’re adding some more songs.

Yeah, we have a tendency to take on a lot of stuff.

END_OF_DOCUMENT_TOKEN_TO_BE_REPLACED

(June 28, 2015) – The band laid into a thick swampy vibe. The drummer put down a groove so hard, you “can drive nails with it,” the singer said. The young guitar player closed his eyes and cradled into his aging Telecaster, wringing out stinging notes between vocal lines.

Susan leaned against a post, swayed to the beat, and sang along. 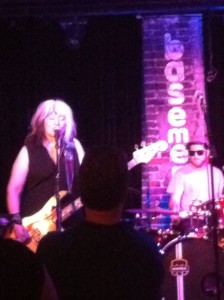 It was Ray Wylie Hubbard’s second and final encore for the rowdy east Tennessee crowd, and the ageless Texas icon was singing about a “Chick Singer, Bad Ass Rockin’.” I looked over at Susan and thought, “Yep.”

A little over 24 hours earlier, I’d watched her from across the stage at the Basement in Nashville, admiring the way she swayed to to the beat with her beloved ’72 Precision Bass strapped around her neck while laying down a groove that was deeper than deep. I love to see her plant her feet and dig into the low end, occasionally dipping her left shoulder in time with the music. I love watching her sing, the way she cocks her head to the left and occasionally looks over at me from the corner of her eye. I really dig her voice, especially when lets a little growl creep in at certain moments.

All of that’s reason enough for me to put up with the bullshit that sometimes goes with playing music.

But this was Saturday, we were off the clock and the two of us were out for two kinds of r n’ r: rest and recreation, and rock n’ roll.

We’d gotten into town mid-afternoon after two days of gigs. Free Saturdays have been at a premium lately, so we felt like going to watch some music. We were fortunate enough to score a couple passes to the Hubbard show (thanks Jimmy and Josh), so we cleaned ourselves up and made the 30-minute drive to the Shed in Maryville, just south of Knoxville.

END_OF_DOCUMENT_TOKEN_TO_BE_REPLACED

Off the Road Again…

(June 21, 2015) Sunday morning and it’s quiet around here. Susan’s sleeping in. Dogs are too. Can’t blame her. Yesterday was a long one, but a good one.

There was no real travel for us this week, but that doesn’t mean it wasn’t a busy time, musically speaking. In addition to our usual work trying to make a few bucks to live on, we had a duo gig, a Bark show, and I had a sideline job as well.

On Wednesday night, we did a short acoustic duo set at Sweet P’s Barbecue and Soul House, where we’ve taken over as hosts of their once-a-month Songwriters in the Soul House series. It’s a fun deal. I book the guests, and we host the shows.

Scott McMahan used to put these together,  and he did a great job, but he recently moved to Virginia Beach and asked me to take over. I was glad to, mainly because I like to see things happen (like the Hannibal Smith of rock n’ roll … I love it when a plan comes together), but also because I’m a big fan of both Sweet P’s and its founder, Chris Ford.

END_OF_DOCUMENT_TOKEN_TO_BE_REPLACED

So what was last weekend about about? Something round on the ends and hi in the middle: Ohio. We generally get up that way maybe once a year, and it’s always a blast. Susan and I have been lucky to make a lot of good friends there over the years, plus many of our favorite bands are from the Buckeye State. 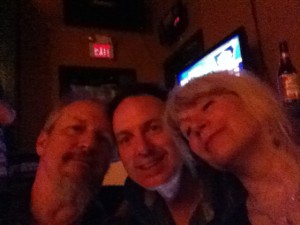 For this trek up I-75 across the Ohio River, our pal Kevin Abernathy joined Susan, Chris, and me. As I mentioned previously, Kevin has a really cool new record called “Ain’t Learned Yet” that we all had a hand in making. He’s also a fun guy to have around, so he’s a welcome addition to the stealth van.